Reach us on Messenger 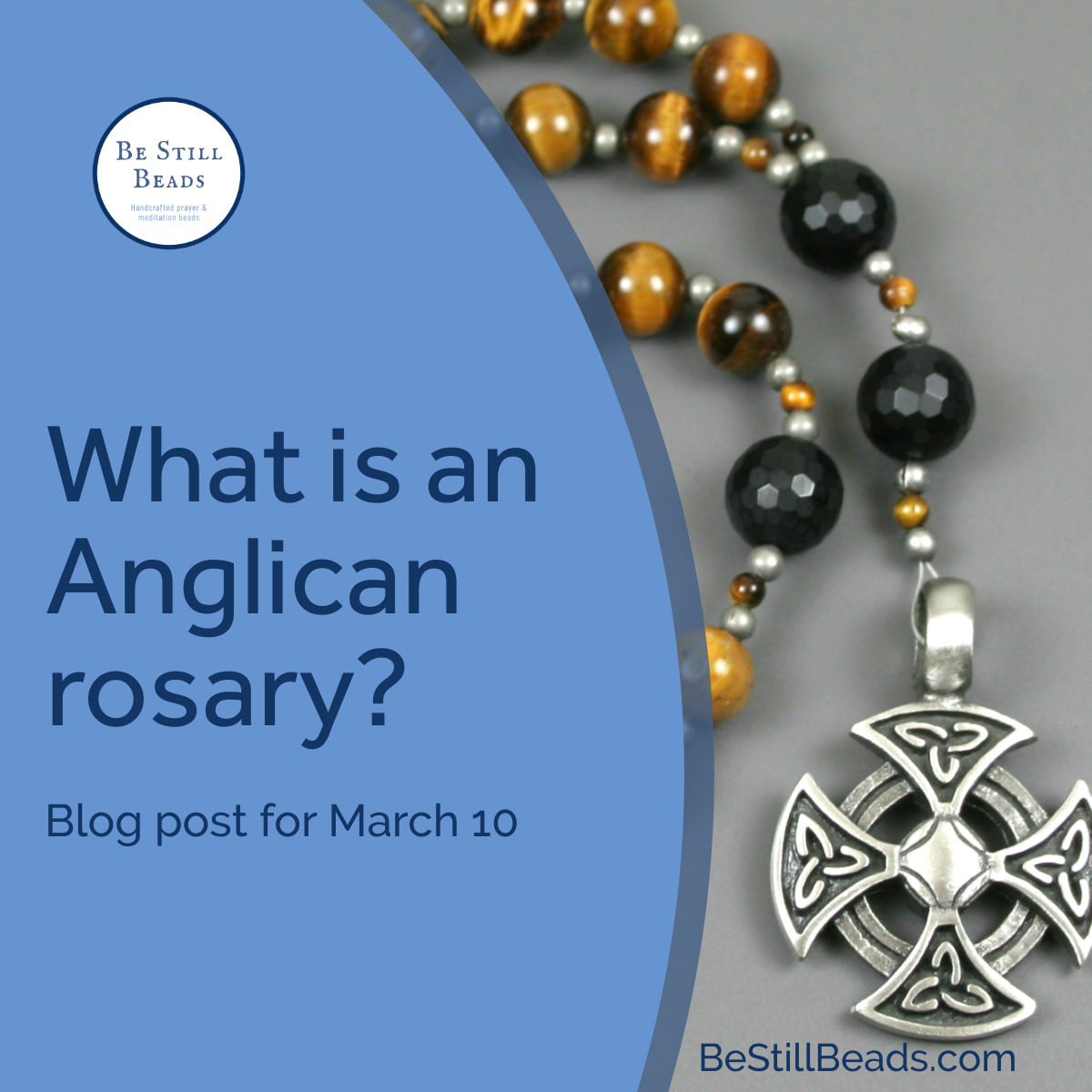 Many people, even those without a religious background, are familiar with Roman Catholic rosaries. Because of their long history and common use, these are often depicted in art and film, which makes them easily recognizable.

Anglican rosaries, on the other hand, are a relatively new option that was developed in the mid-1980s with the goal of making the use of prayer beads more comfortable for non-Catholic Christians, so they haven’t developed the same widespread recognition. They were originally developed by an Episcopalian, which is how they came to be known as Anglican prayer beads, but their use has spread to other protestants and are sometimes known as Protestant prayer beads to reflect that.

So what is the difference?

Before we look at what makes Anglican rosaries unique, let’s take a quick look at the Roman Catholic style rosary.

The loop starts and ends at a connector, which is often a medal of some sort. (In this case, a Miraculous Medal.) A shorter string of three decade-size beads flanked on either end by larger beads leads to the crucifix from the connector.

There are prescribed prayers that are used for these different beads when praying the Roman Catholic rosary.

The traditional style of an Anglican rosary is much smaller. It consists of four “weeks” of seven beads separated by larger beads known as cruciform beads. In the example shown, the week beads are tiger eye and the cruciform beads are matte black onyx. (Again, the smaller tiger eye and metal beads act as separators.)

The loop starts and ends at one of the cruciform beads and there is only one additional larger bead between the loop and the cross.

Whereas Roman Catholic rosaries traditionally use a crucifix as the cross, Anglican rosaries use a much wider variety of cross styles and sometimes even other religious symbols as the terminal end point. Celtic style crosses and other stylized crosses with Celtic knots, like the one shown, tend to be popular.

Anglican rosaries also differ from Roman Catholic rosaries in that there are no prescribed prayers to be used. There are a wide variety of prayers available to choose from, or you can create your own.

Previous article
Water in a dry land
Next article
Caring for your prayer beads
Recent posts
We use cookies on our website to give you the most relevant experience by remembering your preferences and repeat visits. By clicking “Accept”, you consent to the use of ALL the cookies, or use the Cookie settings link to accept only some of the cookies by type.
We never sell your personal information for any reason, but you may still opt out by checking the box below.

This website uses cookies to improve your experience while you navigate through the website. Out of these cookies, the cookies that are categorized as necessary are stored on your browser as they are essential for the working of basic functionalities of the website. We also use third-party cookies that help us analyze and understand how you use this website. These cookies will be stored in your browser only with your consent. You also have the option to opt-out of these cookies, but opting out of some of these cookies may have an effect on your browsing experience by preventing some features from working properly.
Necessary Always Enabled
Necessary cookies are absolutely essential for the website to function properly. These cookies ensure basic functionalities and security features of the website, anonymously.
Functional
Functional cookies help to perform certain functionalities like sharing the content of the website on social media platforms, collect feedbacks, and other third-party features.
Performance
Performance cookies are used to understand and analyze the key performance indexes of the website which helps in delivering a better user experience for the visitors.
Analytics
Analytical cookies are used to understand how visitors interact with the website. These cookies help provide information on metrics the number of visitors, bounce rate, traffic source, etc.
Advertisement
Advertisement cookies are used to provide visitors with relevant ads and marketing campaigns. These cookies track visitors across websites and collect information to provide customized ads.
Others
Other uncategorized cookies are those that are being analyzed and have not been classified into a category as yet.
Save & Accept
Powered by